Fun with Dick and Janet (1)

Dick receives an unpleasant order from the home planet on the hour-long third-season opener: he must marry the Big Giant Head's niece Janet. As Sally, Harry and Tommy escort Janet on the rocket to Earth, the bride-to-be sets out to prove that she's a true domestic goddess, brushing up on her skills by reading The Joy of Cooking, The Joy of Sex -- and The Joy of Yiddish. But a defiant Dick is sticking by Mary; whether Mary will stick by Dick is another question. Meanwhile, Janet's arrival in Rutherford is anything but quiet: Officer Don suspects that aliens have landed. 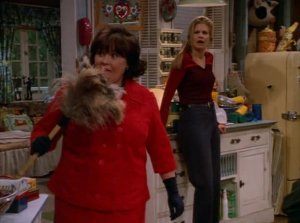