Portrait of Tommy as an Old Man

Tommy, tired of having to handle all of the "kid" duties [when in reality he's the oldest member of the mission], decides to retire. After he spends some time at a retirement home, he changes his mind, realizing that a big part of what makes you old is acting -- and being treated - like your old. Dick, thinking that Mary is anguished because she never got a chance to fulfill her fantasy of becoming a torch singer, tries to help her to realize that dream. He learns that sometimes the choices we make between two career paths can be right on the money. In a moment of weakness, Officer Don steals a pair of Sally's panties, and makes a series of vain attempts to return them without being caught in the act. 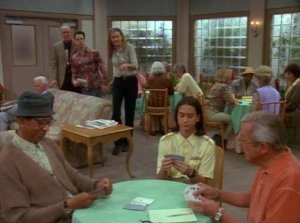