Dick receives a chain letter, but hesitates to discard it when he sees all of the ill fortune that befalls Mary after she scoffs and tosses hers out. When Dick does throw his away, he worries that he won't receive the prestigious physics grant he's applied for, and becomes obsessed with oddball charms and superstitious behaviors he thinks will bring him luck. What he doesn't realize until too late is that his weird behavior itself has caused him to lose the grant. Sally discovers the wonders of the Hardware Stop Superstore with the help of hunky and extremely competent employee Justin, and begins concocting problems just to spend time with him. Harry, whose orange shirt looks exactly like the Hardware Stop uniform, is baffled when other customers keep asking him to help them make keys, weigh bags of nails, and answer hardware questions. Also, chagrined that Alissa seems to have a massive crush on the Rutherford Ice Hogs' star hockey player, Tommy becomes concerned that he's not manly e 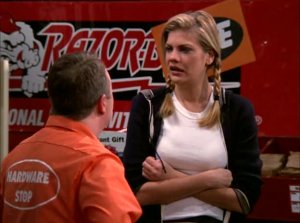