It's the Christmas season and Eric has his three oldest children doing charity work for the community. Mary and Lucy aren't enthusiastic about the charity work that Eric wants them to do. Mary is working in a soup kitchen while Lucy has to organize auditions for the "Live Nativity" at the church. Meanwhile, Eric has given Matt a well-paid job as Santa Claus at the mall. Also, Simon is in the spirit of wearing his VERY tight candy cane pajamas and wanting to put on lights inside the house since he's not allowed to do it outside alone. As a family ritual, each family member picks a name out of a hat of who to get for Christmas while Eric and Annie cheat. Before going on his family vacation, Jordan accidently gives Lucy a gift that was meant for his uncle's monkey (shoe shine-kit), but was supposed to give her a basketball signed 'I Love You'. Also, Mary meets a a guy, Carlos at the soup kitchen who doesn't have a place to stay for Christmas, so Mary invites him to stay over at their hous 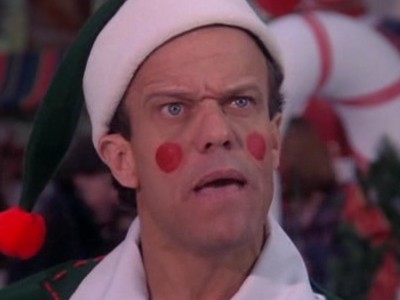