David Attenborough takes a breathtaking journey through the vast and diverse continent of Africa as it has never been seen before. In Africa's ancient south west corner, two extraordinary deserts sit side by side. Water is in short supply, yet these deserts are somehow full of life because the creatures that live here have turned the rules of survival on their head. This film celebrates nature's ingenuity, no matter how tough it gets. In the Kalahari scrublands, clever meerkats are outsmarted by a wily bird, solitary and belligerent black rhinos get together to party and giant insects stalk huge flocks of birds. Rain almost never falls in the Namib - instead it must make do with vaporous, vanishing fog. The creatures in this, the world's oldest desert, have gone to the extremes, as spiders wheel to escape and a desert giraffe fights to defend his scant resources in the greatest giraffe battle ever filmed. 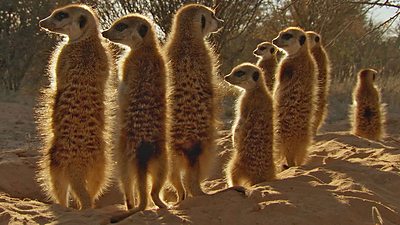