This music video is about two high school students - kung fu master Hanako and her boyfriend Ichimonji. They find themselves suddenly on the run after it is announced on television that Hanako is the enemy of the world, responsible for everything from the stock market crashing to bizarre weather patterns. Pursued by the police as well and many colorful assassins, Hanako and Ichimonji's feelings for each other are put to the test. Originally planned as a series, but eventually cut down to a single 10 minute episode, Kung Fu Love still manages to pack in plenty of action, romance, laughs, gorgeous scenery and a plot to boggle the mind. 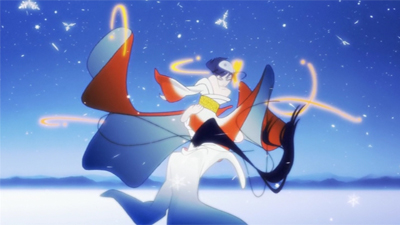