Rebel With A Cause

Present: Rene represents an elderly couple facing eviction from their retirement community for publicly displaying their affection. Rene and Turk take the big plunge and make their relationship public. M.E. writes a spirited column defending Dixie, which brings an offer from the Cross-Bearers of the Confederacy to make a speech at their Confederate Flag Memorial Rally. Unsure of whether to accept the offer, she ponders the symbolism and meaning of the Confederate flag and discusses it with her family and Rene. She finally agrees to attend the rally as long as Rene comes with her. During her speech, she questions the wisdom of the South's defining itself by the Civil War, and urges the audience to adopt a new symbol for the South -- ""one that unites and points to a future healed by peace and tolerance instead of a past wounded by war and racism"". The speech proves wildly unpopular, and M.E. and Rene flee the rally in a hail of boos and racial epithets. Past: Teresa's chance meeting with 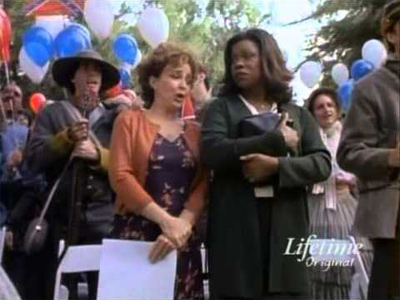