Mitch is happy to announce that he is going to work on the beach again, when a new lieutenant arrives to Baywatch. The new lieutenant turns out to be Mitch's old flame Stephanie Holden. Ben meets her first and suspects that Mitch isn't going to like this. When Mitch sees her, he becomes upset and calls Chief Thorpe. Thorpe tells Mitch that it's up to him to decide if she can stay or not. Both Mitch and Stephanie has flashbacks back to 1989 when they first meet. Stephanie was substituting for Jill back then. He met her in the men's locker room. They had a little romance and decided to spend a weekend together in Catalina. But Stephanie never showed up and Mitch was upset for a long time. Now, Stephanie tells him that her ex-husband came to her and wanted her back. She accepted this and left Mitch behind. Mitch and Stephanie rescue a man together and Mitch realizes that she is a good lifeguard. He writes a letter to Chief Thorpe that she can stay. Meanwhile, Matt is ordered to patrol on 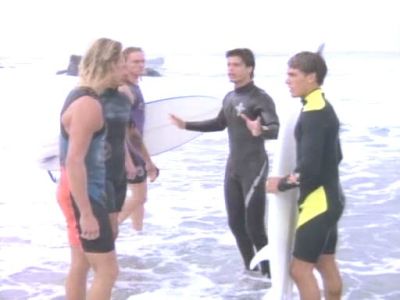