John D. Cort comes back to Baywatch and the episode starts with Cort hiding some stolen artifacts behind some rocks in Mexico. Then when the Mexican border police and a man named Jake arrive, they can't find the artifacts and Cort is free to go. Cort left Baywatch a year earlier when he found out he had a degenerative eye disease that causes gradual blindness (Episode #73, Blindside). When Mitch is talking to John at the switchboard, he is surprised to see Cort out on the balcony. When he goes out to say hello, he doesn't know if Cort is blind or not, but he becomes happy when he finds out he isn't. When they are walking on the beach, Cort tries to convince Mitch to enter the Baja run with him. He finally gives in and says yes. When they see a fight in the water, Mitch and C.J. have to stop it and afterwards Cort and C.J. share a kiss, but that's it. Later Mitch and Cort arrive in Baja to meet a friend of Cort's named Al who is providing them with a dune buggy. During the race Cort 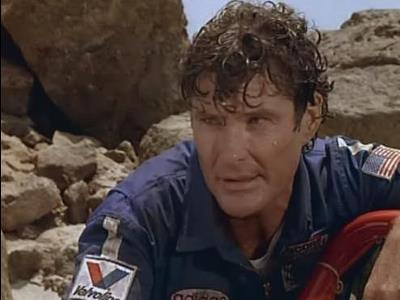