Mitch and Cody witness a disaster involving a parasailer and a boat. When they are heading for the rescue, they are once again beaten by Bayguard, a new firm that specializes in privatizing lifeguards. When the rescue has been completed, Mitch is introduced to Alex Ryker. She is the CEO of Bayguard. She tells Mitch that she plans on going up against him for the county contract. Baywatch's contract with the county is about to expire. The next day, when Mitch goes to the Chief's office, he is surprised to find Alex there. It turns out that she has shown the Chief a videotape of some of Bayguard's amazing rescues. She has also shown the Chief a tape showcasing the Baywatch team slacking off. Mitch objects immediately, but the Chief thinks that Alex's proposal warrants consideration. After his meeting with the Chief, Mitch tells his lifeguards to start acting like professionals, otherwise they will not have any jobs left by the end of the week. Meanwhile, when April sees a man having a hea 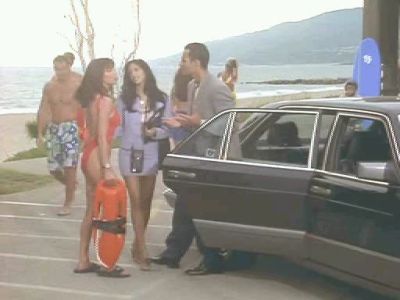