Jonathan Ross goes in search of his hero, Steve Ditko, co-creator of Spider-Man but virtually unknown to all but a handful of comic-book enthusiasts. In a one-off film for BBC Four, Ross, a noted comic-book enthusiast and obsessive Ditko fan, goes in search of the comic-book legend who lives his life as a recluse. Ditko should be a multi-millionaire. Many times he has been offered vast sums of cash in return for explaining why he left Marvel and, of course, Spider-Man, the character he co-created with Stan Lee back in 1961. Ditko and Lee worked together at Marvel for five years but, when Spider-Man was on the verge of becoming the best-sëlling comic book in the world, Ditko left the book and the company. While at Marvel, he had designed all of the characters, illustrated and inked each issue and provided Spider-Man with his unique look. He'd also plotted every story, leaving Lee to write the dialogue. In the years that followed he continued creating many new and wonderful characters for the biggest comic companies, as well as expressing his own political and personal views in independently published books. He has never explained why he left Spider-Man when he did, or why he has never returned to draw his most famous character again. It's a question that intrigues and perplexes comic fans all over the world. Meanwhile, Stan Lee's contribution to the Spider-Man phenomenon has left him well-known and wealthy. To discover what led to Ditko's unusual career path, and in an effort to ensure this reclusive genius receives the credit that he's due, Ross heads off in search of both the man and, hopefully, the truth. Ross's search takes him from the UK to Los Angeles. On his journey, he talks to those who have met and worked with Ditko, including Lee and another comic-book legend, Northampton-based Alan Moore. 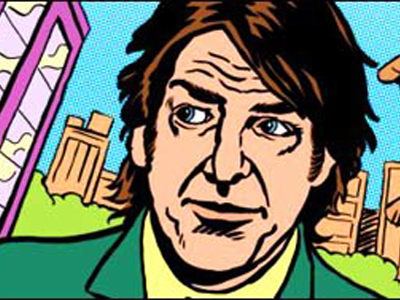