You Gotta Have Heart

Finley pushes Kelly to end her relationship with Brandon, but she cannot go through with it. She later dumps him during a confrontation at Finley's new headquarters, and Brandon reluctantly turns to Dylan for help. Valerie uses her new windfall to move out of the Walsh house and into a luxurious hotel. She ignores Dylan's warnings about the loneliness associated with life at a hotel. Donna goes to bed with Ray but then cuts things off, leaving him very frustrated. Val pops the lighter in Ray's truck, draining the battery so that he has to seek a ride. She lures him back to her hotel room. Andrea becomes uncomfortable when she and Jesse run into Peter and his wife at the movies. Everyone pitches in as the After Dark hosts a telethon for pediatric heart patients. Steve struggles to fulfill his promise to get the R&B group Jade for the event. Music: 'Hold On' performed by Jamie Walters, 'Mind, Body & Soul' / 'Every Day of the Week' performed by Jade. 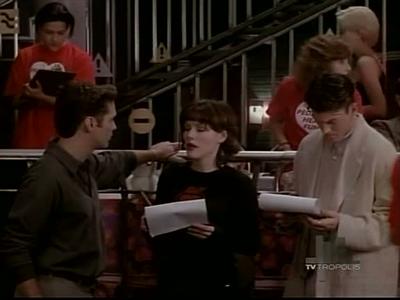