Jim and Cindy leave for Hong Kong. Kelly wants to continue her relationship with Brandon, but he cannot get over the rejected marriage proposal. Steve and Donna head to Palm Springs for an Alpha/KEG convention. A contrite Ray agrees to accompany Donna, who is making a speech at the event. He quickly becomes angry and possessive. Rush tries to set up Steve with a business associate's daughter. Steve is more interested in the Cadillac-driving "goddess" he keeps encountering. Brandon and Valerie decide to head to Palm Springs to avoid the caravan of potential buyers who have overrun the house. Brandon goes on a drinking binge and finds himself tempted by Valerie. He has a hallucination in which his parents appear and express their disappointment. Kelly postpones her trip to the convention to spend the day with Allison, but is very secretive. David and Clare see them together and get the wrong idea. Allison admits her love for Kelly, who is not interested. Dylan's plans to visit his mother and sister are nixed when Charley finds an investor for the movie. Dylan is wary after learning that the man is a mobster. Music: 'Feel So High' by Des'ree, 'Leaving on a Jet Plane' by Peter, Paul & Mary, 'Fish Taco' by Dick Dale. 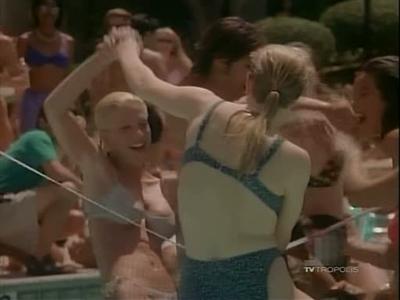