Brookside is a now defunct British soap opera set in Liverpool, England. The series began on the launch night of Channel 4 on 2 November 1982, and ran for 21 years until 4 November 2003. The series was produced by Mersey Television and it was conceived by Phil Redmond. Brookside became very successful for a number of years and is notable for its tackling of realistic and socially challenging storylines. It was at its most popular in the 1980s and the early 1990s. From the mid-1990s it began raising more controversial subjects under the guidance of new producers such as Mal Young and Paul Marquess. It is especially well-known for broadcasting the first pre-watershed lesbian kiss on British television, as well as a powerful domestic abuse storyline resulting in murder. The series caused an uproar when it featured a storyline featuring a consensual incestuous sexual relationship between two sibling characters during 1996. Brookside was also the first British soap to feature an openly gay character when (Gordon Collins) came out in 1985, and it was also the first to depict serious drug addiction with a number of different characters. Although the series had a long and successful run, by 2000 its viewing figures were in terminal decline and low ratings eventually led to its cancellation in July 2003. The final episode was broadcast on 4 November 2003 and was watched by around 2 million viewers. 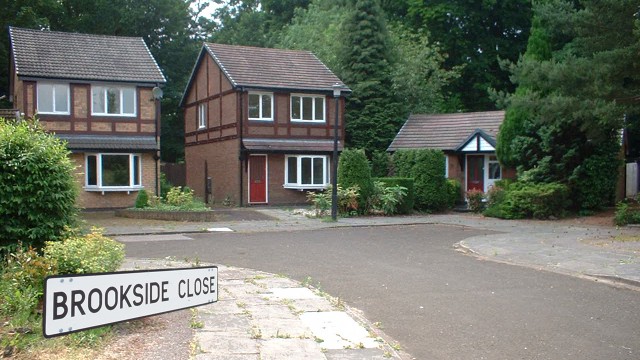