Caroline and the Freight King

When a doodle of a porcupine drawn by Richard gets into a stack of Caroline's greeting card designs by mistake, Del tries to convince Richard to develop the idea into a character of his own - but Richard protests that he is a real artist, not a cartoonist, throwing Caroline for a loop. Annie can't seem to shake a recurring five dollar bill with ""Repent"" written on it, and her mother tries to convince her it's a sign from God that she should return to the Church. When Caroline accidentally gets locked inside the laundry room overnight, her encounter with a bum who used to be a trucking magnate convinces her she has made the right career choice. Richard succumbs to Del's monetary temptation and produces a series of increasingly gloomy and unusable porcupine cards; and he finally apologizes and admits that he admires Caroline's professionalism as a cartoonist. Meanwhile, when a telegram stripper shows up at Del's office by mistake (she was supposed to be at a law firm), Del hires her as r 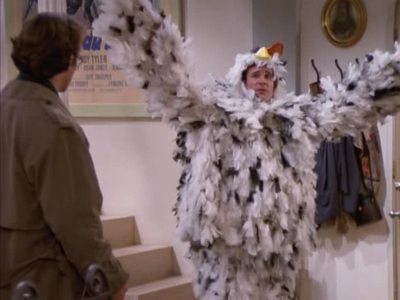