Ellen's attractive, married cousin Joan Robinson (Kay Lenz) comes to visit and puts the whammy on Charles. She is very direct about what she wants and she wants Charles. Unfortunately, Walter finds them together in the living room in the middle of the night and comes down hard on Charles. It makes it difficult when Mrs. Robinson won't take "no" for an answer and puts Charles' job in jeopardy. While Charles is trying to work out the limits of an "off-limits" relationship, Buddy achieves hero status when he saves Paula Thackery (Julianne McNamara) from a crazed water gunner. Along with hero status, however, comes hero worship, which he isn't ready for from the young high schooner. So while Charles has a problem with an older woman, Buddy has trouble with a younger one. Buddy is more than willing to trade. 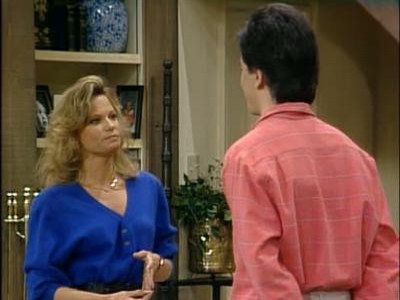