A storm is brewing and it is Fuffa's first. Rainbow is very excited because he likes to conduct the storm. Dark rain clouds appear and Bobo White and Little Star are unnerved by them and the growing noise and retire to the Cloudy House. The Cloudbabies look after them and reassure them that the noise of thunder is natural and it's just the storm clouds' job. Even when the Cloudy House rocks, the Cloudbabies manage to hang onto the pictures and vases and make a game of it. Bobo and Little Star start to feel more reassured. Meanwhile Fuffa is nervously awaiting her part in the storm. Rainbow is conducting the clouds to bang into each other like drums. The rain coming down is like the sound of chimes and the lightening is like the cymbals. The Cloudbabies encourage Bobo and Little Star to come outside to watch Fuffa join in. She does so tentatively at first but soon gets into the swing of it and with Rainbow's gentle encouragement, she is soon thoroughly enjoying herself. The Cloudbabies, Little Star and Bobo all dance to the heavenly music, all fear of the storm now gone. 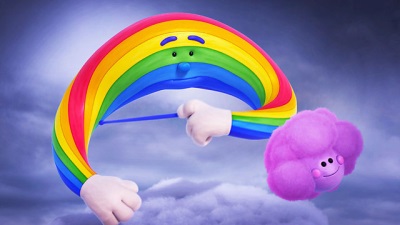