Rainbow tells Fuffa, Bobo and Little Star a scary story about the fearsome rainpear pirates, the scourge of the sky! Bobo White is thrilled and resolves to find the pirates but it's now bedtime. As he goes to bed, Bobo spots a cloud that drifts past his window. It looks like a pirate ship. In the morning, Bobo and Skydonk chase the cloud shapes in the sky, thinking each time it may be the rainpear pirate ship! Sun joins in the game and suggests he looks in the garden for treasure! Baba Pink plays along too and sends Bobo to the orchard - where the rainpears are. There Bobo spots a cloud that he is sure is the pirate ship. As Bobo gets closer, the ship-shaped cloud changes direction and emits a thunderous rumble, as it seems to chase after him. The Cloudbabies find Bobo hiding under the table in the cloudyhouse. He points out the window to show them the rainpear pirate ship. Baba Blue agrees that it looks very scary but takes him outside to show him that it really is just a thunder cloud. The Cloudbabies explain how clouds can be any shape you want them to be - if you look hard enough. As they look at clouds in the sky forming into the shapes of lots of different things, Bobo White emerges on a ship shaped cloud - as the captain of his very own rainpear pirate ship! 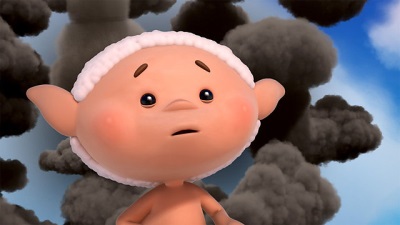