Tell Your God to Ready for Blood

Deadwood's first true elections are nearly here, with the offices of sheriff and mayor to be decided. Tonight, the candidates will state their cases to the townspeople. One of Hearst's Cornish workers is killed at the Gem, leading Swearengen to suspect that the incident was a staged Hearst power play. Ellsworth and Doc Cochran are alarmed by complications involving Alma's pregnancy. Star gains a new home from Adams' orchestrated foreclosure. Jane prepares to tell the camp's children about her experiences scouting for General Custer. Shocked by her inability to make a clean break from the gut-stabbed Tolliver, Joanie considers taking the easy way out. Hearst will give Bullock his political backing if Bullock promises to exert influence over certain areas of the camp. 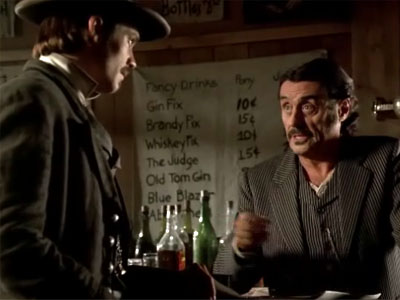