Fiona confides in Declan about the truth about Bobby, but Declan has doubts. With advice from Holly J., Declan sides with Fiona when he sees her bruised leg and advises Fiona to press charges against Bobby. But Fiona runs back to Degrassi. When Anya comes clean to Sav that Holly J. talked her into faking a pregnancy, to make him drop out of the election race, they team up to use the sympathy card, now that everyone knows about the "pregnancy". Meanwhile, Jenna overhears Clare and Alli's conversation about surgery, and misinterprets it as breast enlargement surgery, when Clare was really was talking about being a candidate for laser eye surgery. The election race ends and Sav ends up winning by 17 votes, and Fiona's mother tracks her down to Degrassi. After having a heart to heart about the situation about Bobby, Fiona's mother tells her that together they will hire a lawyer. 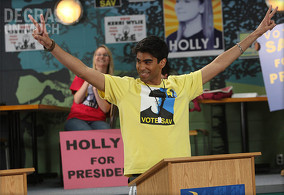