I Just Don't Know What to Do with Myself (1)

Sav wins four tickets and backstage passes to a concert in Hamilton. After his dad does not let him go, Holly J. and Sav decide to hold a 'Hands on a Car Body' contest for the tickets, using his dad's truck. The contest ends with Eli and Adam splitting the four tickets. When unloading the truck, an amp falls into the tail light of the truck. Not having anyone to give their extra tickets to, Eli and Adam give theirs back to Sav. He sells one to Bianca to pay for the new tail light. They then ask Sav to if he can take his dad's truck to the concert. When Sav tells his dad the tail light got smashed, he says Sav can not go to the concert. Fiona's mom has left town and told her to see a therapist. Fiona makes plans to spend time with Holly J., but her schedule is too filled to spend any time with Fiona. Jenna got a new uniform for the Power Squad calendar shoot, but she can not fit in it. She thinks that she's getting fat, and tries to working out. After, Bianca told the power squad that she can get fat absorbing pills, and Jenna asks her to get some. 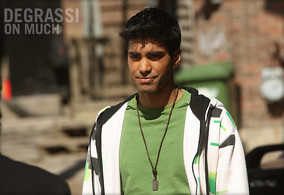