Alli tries to ignore Drew but when Drew tries to move on, he realizes he likes Alli. When she refuses to take him back, he does all he can to get her by doing what she wants. Sav and Holly J. continue to work on the dance, and become closer. At first Holly J. is worried that Sav is just a rebound boyfriend, but they decide to keep each other company for their last school year at Degrassi. Connor sets up a meeting with the girl, but Dave and Wesley convince him not to talk to her when they see she is a much older lady. 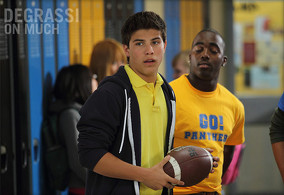