The Shep wins Principle of the Year award. Clare gets mad after the Shep continually mistreats Connor. After she and their friends stick up for him, they all get detention. After Alli gets annoyed with Connor for tapping his pencil, Connor spits in her face. Alli breaks his pencil and Connor pushes Alli to the floor, causing expulsion. When Clare finds out Connor has Asperger syndrome, she realizes that Shep still will not treat him any differently. She confronts him, saying he only likes jocks, and Shep calls Connor a freak, and Clare a little bitch. When the award ceremony comes on, they show the video of Clare and Shep's argument, and the school goes against him. This also angers the board of education (and Connor's parents who threaten to file a lawsuit) and Shep almost loses his job due to the video. Instead he is suspended from his position and is ordered by the board to go to sensitivity training in order to avoid being fired because of union rules. Sav's parents understand he wants to date, but he has to marry a Muslim no matter what. Anya leaves, but the next day, Sav tells her that he would still see her, and that he doesn't care what his family says. 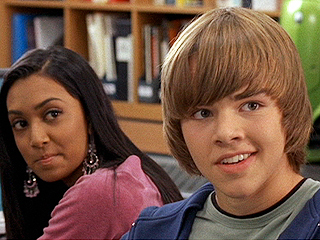