Try to Remember This Kind of September

Dharma finds herself inadvertently trying to compete with a visiting childhood friend. Dharma and September grew up together in a commune, and September has remained loyal to her nonconformist ways, such as preparing a salad with greens that ""were growing in the cracks in the sidewalk"" and singing songs taught her by Nelson Mandela. Feeling guilty over how much her own life has changed, Dharma decides to get back to basics. First, she simplifies her wardrobe; then she wonders what else she and Greg can do withoutâ€”like maybe electricity, or at least Greg's beloved television (just before the Superbowl). But what worries her most is a suspicion that September may have designs on Larry. And she's rightâ€”but they're not what she fears. 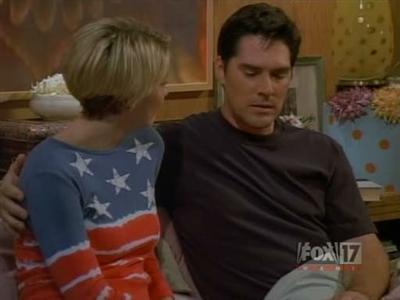