The Keaton family unites in crisis when Steven suffers a serious heart attack. While Alex and Andy discuss the upcoming Presidential race, Mallory and Jennifer prepare for another legendary shopping expedition. Moments later, Elyse returns home from jogging, but Steven lags behind, explaining that his run was slowed by a burning pain in his side. Steven dismisses the pain, assuming it was due to something he ate, while Alex kids him that the pain was caused by the guilt of being a Democrat. Feeling much better the next day, Steven goes on a long bicycle ride. But when he returns home, he has difficulty breathing and collapses on the floor. After rushing Steven to the hospital, the family is stunned when Dr. Harrison tells them that Steven has suffered a heart attack and needs bypass surgery immediately. In the waiting room, the Keatons befriend Ruth Hobart, the kind and encouraging wife of another heart patient, and the jocular Mr. Meyers. Before Steven is wheeled into surgery, he and 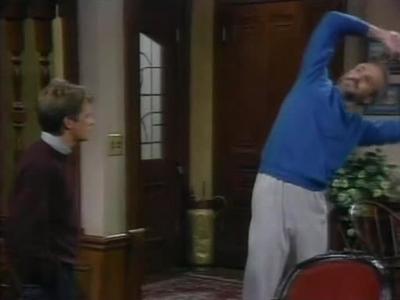