Aliens conduct secret experiments in an abandoned hospital. - - - Quatrain 12, Century 5. "Where angels touch grace / One without sight sees the dark enemy / At the right hand of the twice-blessed man / The ally leads him to the summit." I'm fighting against an enemy nobody sees or wants to believe exists. I'm getting to the point where I'm not sure why I was doing this & waging a war that I seemed doomed to lose. I was thinking of giving up the fight. Nostradamus predicted I'd find an ally where angels touch grace. Eddie and I thought that might be a reference to Grace General Hospital in Los Angeles. I needed to find that ally. This desperate quest drove me to a desperate act & I faked insulin shock to get into the hospital to look around after hours. They put me in the 23-hour hold for observation. That night I stealthed my way through the empty corridors and picked up some O.R. scrubs to pose as a doctor. 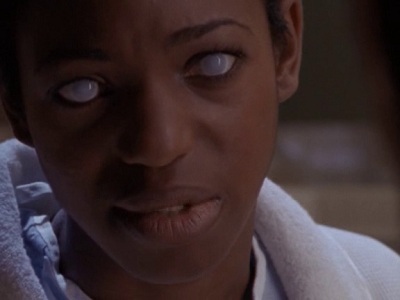