A young man kills nine people in an act of senseless violence, based on his experiences in an alien-run amusement park. - - - Fork Falls, South Dakota. Gary Lanning shot and killed nine people in a fast food joint. When the cops found him, he was stuffing his face with fries. The publically released records of a psychiatrist said Gary had delusional fantasies of time spent in an amusement park called Playland. That was before Gary stabbed the shrink in the heart with a pen. Are kids like Gary who Nostradamus was talking about when he said ""youth most murderous?"" Is it possible that this troubled teen's delusions were caused by a Gua experiment? I went to Playland to find out. Met Eddie in the Laser Gun House at the park. Kids were running all over the place, we found a back room. Eddie said there was an abnormal electrical ion level focused there. Gary mentioned going through a secret door in the park. The quatrain spoke of a ""threshold of light."" We'd seen the Gua use quantum pocket 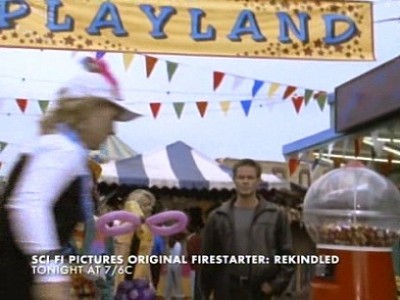