This week Maeve delves into the intricate and specialised realm of preserved and fermented vegetables and fruit from around the world. She meets preserving supremo Pietro Demaio on his Mornington Peninsula farm to learn the key rules of preserving eggplant – which is the basis for a fiery Calabrese mix – a magnificent blend of chopped preserved vegetables perfect for bruschetta. Then, it’s a visit to the Blue Mountains where apple cider vinegar is distilled by German-born Claudia Kindler – and used by chef Martin Boetz in his grandmother’s recipe for a crunchy, creamy ‘gurkensalat’. Korean food ambassador Heather Jeong demonstrates how to make a vegan radish kimchi, before chef Somer Sivrioglu shares his secrets for making the red pepper paste in every Turkish pantry known as Biber Salçasi. Finally, Maeve visits two Japanese expatriates who ferment a flavourful rice known as Koji on the Gold Coast. 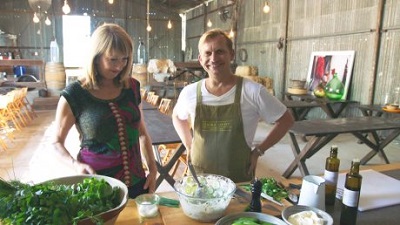