Spanish food is incredibly varied, the first recipes were written in the fourteenth century and the cuisine was enriched by the Moors, Arabs, Sephardic Jews, French and Italians as well as the voyages of discovery to the New World which resulted in a huge range of new ingredients. With its very different regions – the long coastline, rugged mountains, baking plains and rich farming land, there are a vast range of dishes but they all have one thing in common – they’re all simple, unpretentious and use beautifully fresh seasonal ingredients. Eating is more than simply looking after hunger pangs – food is savoured and enjoyed communally and many traditions have evolved over the years including the famous tapas – the series of small snacks eaten with a drink as the prelude to a meal. In Australia we’re familiar with some of the main culinary exports like paella, and sangria and still coming up to speed with the lesser known zarzuela (seafood stew) and fino - the dry sherry that makes for a great aperitif and goes so well with the strong flavours of some of the tapas dishes. Its worth seeking out the best ingredients – a good Spanish paprika, saffron, olive oil, being generous with garlic and wine and having a go at making some of the simple Spanish recipes here. Enjoy. 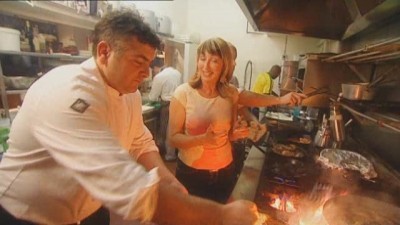