The pursuit of a motorbike ends in a head on smash between the patrol car and the fleeing motorbike. As unlikely as this sounds it’s just one of the many things Officer de Bono discovers is not as it should be about this bike rider. A car runs through a random breath test stop, narrowly missing the officer trying to wave it into the side of the road. Officer Dean Pickering flags him down and discovers the driver is a jittering mess who claims to be so scared of the police he didn’t want to stop. Officer Brad Hall pulls over a driver for doing an illegal right hand turn. He then discovers that the driver is suspended and has been drinking. But she thinks she knows more about the law than Officer hall and it takes a lot of negotiating to get her back to a police station. Officer Luke Anderton pulls over a woman for speeding and it’s the first time she’s ever been stopped by police. When they start to joke about Luke “being her first” Luke loses his train of thought and let’s her off! 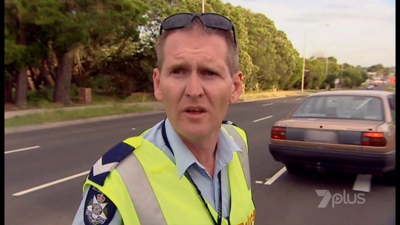