The Old and the Dead

Beau meets Megan's cousin, NBC's Tim Russert. Kay and Stan return to duty, after Stan undergoes a final test, and Kay finds her desk has been moved. They like Beau, they both must get used to the job again. Tim and Beau investigate the discovery of a skeleton found buried in a backyard. Bolander and Munch discover an unlikely suspect in the murder of a quiet elderly couple: their grandson. Gee exposes Granger, who used his relatives in some department plumbing contracts; the information is leaked to the papers, Granger is forced to retire. Barnfather is made colonel and a new captain is named, Megan Russert. The higher ranks of the Baltimore police department are now more politically correct, but Gee doesn't like it. 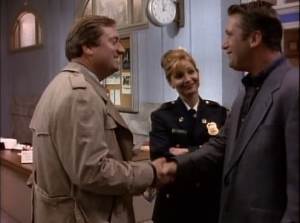