Time Out of Life

A bad snow storms hits Hart, Missouri. Grace and Tom's relationship is exposed when a fellow professor catches them kissing in her office. Later in the evening, Peter turns to Grace for advice when he finds out Courtney is having sex with her boyfriend. Meanwhile, Jack's relationship with Katie (guest-star Kate Mara, ""Everwood"") progresses. In an effort to become popular at school, Bobby and Warren (guest-star Dean Collins) decide to have sleep over and come up with a shocking idea to make the evening memorable. Jack, Courtney, Missy and Katie are also trapped together, where they play a game of dare and inevitably leads to Jack and Courtney's first REAL kiss together in front of everyone. Tom babysits Bobby and Warren's sleepover with the ""cool"" kids at Grace's house as he coerced them into coming as they promised they would watch porn. But the plan backfires when the tape goes missing, the power goes out and everyone is trapped. Lastly, Grace and Peter are stuck in their offices on c 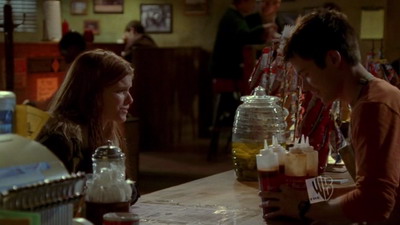