On board the aircraft carrier USS Coral Sea, Harm & Admiral Boone await the arrival of the transport plane to take them back to DC. Harm was onboard the carrier to review the new Atlantic Fleet JAG command structure, while Admiral Boone was onboard making a business representation to the CAG of the Coral Sea. Admiral Boone, reassigned when SecNav Nelson was replaced, tells Harm that he's retired for good. Just before they board their aircraft, the CAG tells Adm. Boone he was impressed with his presentation, but when Harm goes to shake the CAG's hand goodbye, the CAG refuses to take his hand, brushing him aside. Harm is left wondering why the CAG, who he had never met, appears not to like him. They then exit to the flight deck in time to see their plane about to land. The landing however, doesn't occur, since their tailhook broke away & landed on the deck. The COD initiates an emergency take-off, leaving the two friends with the realization that they will spending this Christmas E 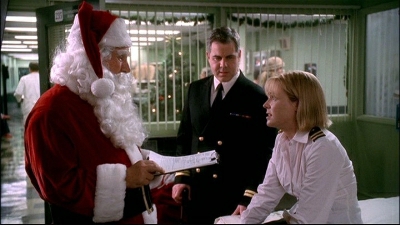