When civilians are killed in a bombing raid, an International Criminal Court charges the United States with war crimes and the SecNav is the one on trial representing the USA. The SecNav is defended by Harm, Mac & Bud who find they must also defend the United States decision for waging the war. At the end, the court finds the USA on the following charges: Crimes against humanity - Not Guilty War Crimes - Not Guilty Intentionally targeting non-combatants - Not Guilty Willful destruction of civilian property - Guilty. The court orders the USA to provide reparations to the town of Tikifa in the amount of $20 million US dollars. The prosecutor mentions to the SecNav that he doesn't agree with the verdicts, but pleased the SecNav won't have to go to prison. In response, the SecNav states that the two countries have been friends for too long and they both go off to get a drink together. Back in the USA, when Bud has to fly overseas to help defend the SecNav, Mike is asked to baby 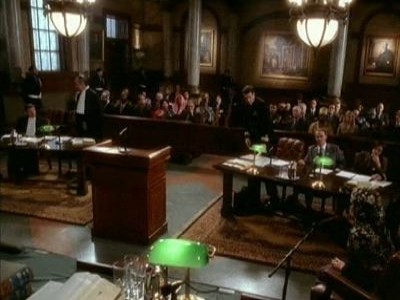