1. Opening Titles: Def Leppard 2. Footloose Mixed dancing was banned at my religious Jewish school, ala the movie Footloose starring Kevin Bacon. So ten years after graduation I stormed back onto the school grounds Bacon-style and cut Footloose, in some mad act of seeking vindication and closure that I'm sure a psychiatrist could explain better than me. 3. Music Mole: ARIA Awards John talks with the Music Mole about record companies planning to boycott the 2001 ARIA awards, due to the head of the ARIAs that year being Dennis Handler, who at the time was head of Sony Australia. 4. Pulled album covers John presents the issue of album covers that have been pulled due to a major faux pas, controversial images, or pressure from specific groups such as McDonald's. 5. Slipknot John attempts to get 9 guys into a very elitist nightclub by dressing them up as the band Slipknot. 6. World of Instruments Frenzal Rhomb playing "Punch in the Face" with the instruments of Pakistan 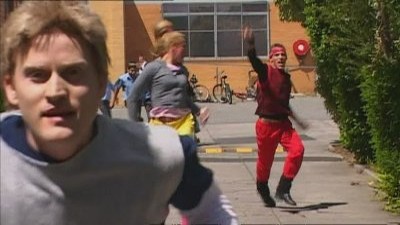