Some of the Gambling Bug's examples to gambling are these:one man has had a dinner at a cafe.He wants to bet the waiter a coin flip and the waiter begs to make him just pay the bill of the repast he deserves to.Men will also have a money bet that a fly will land on their glass first(and they don't know they're not wearing glasses).The third example is a man has won a casino slot machine of three picture pairs.The man has won on three orange pairs but his prize are three oranges and the man tries to punch the machine.The narrator tells the audience ``So remember folks,beware of the gambling bug!and soon the bug argues. After the narrator gives us some clues to beware of the gambling bug,the bug goes on a vacation thinking that he will leave his victims today.Suddenly,he sees a gamboled dog telling a black and white cat if he'd like to play the Wheel of Penalty card game.The cat disagrees and says he's through playing cards with him.The Gambling Bug then bites the cat's ear and soon the cat loses.The cat spins the wheel and his penalty is Penalty #14.The penalty is the Gesundheit.He is forced to blow bubble gum and then get affected by sneeze powder,causing him to sneeze and the big bubble gum covers him. The bug bites the cat again and this time the cat got Penalty #75.The penalty is that the winner shoots a toilet plunger at the apple on the loser's head,but the dog shoots the plunger into the cat's face.The bug bites him again and the cat gets Penalty #15.The penalty is to roll out the barrel of gunpowder.The dog then puts a firematch on the gunpowder and the cat blows up and flies back onto the ground.The cat tries to play again but the dog quits.The bug decides to play with the cat but the cat gets a card of four hearts.The bug tries and he gets a card of two hearts,so the cat whacks him with a Post Newspaper as the penalty. 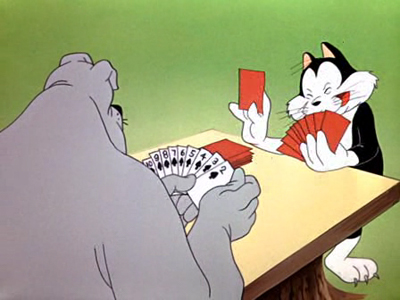