Wake Up the Gypsy in Me

A rare politically themed toon. In old Russia, the happy Cossacks, peasants, Volga boatmen and Gypsies sing the title song while a happy musician strums his balalaika with a herring. Meanwhile, Ricepudding the Mad Monk (an animated version of Rasputin!) tries to force his affections on a Gypsy girl whom he ordered his Cossack chieftain to capture for him. But before he can, the Mad Monk is overthrown by a peasants' hammer-and-sickle revolution. The all-singing, all-dancing Russian peasants are pitted against bomb-throwing anarchists! The Mad Monk not only has his eyes on the throne, but on the fetching girl whom he is about to annex before the peasants storm the palace and put a bomb down his pants! All this, and there is still time for lots of singing and dancing to the classic Tin Pan Alley song. 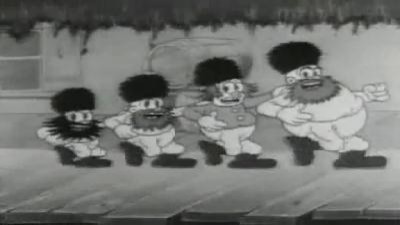