The Pied Piper of Guadalupe

Sylvester plays Mexican music on his flute in an attempt to catch all the mice. They can't resist the music so they come dancing out of their mouse hole, one at a time. Speedy is the only one who resists. Later in the cartoon Slowpoke Rodriguez comes to visit. He is hungry but is too slow to get food out of the kitchen without getting caught by Sylvester. Speedy goes for him but gets stuck in a glue trap set up by Sylvester. Lucky for him he had a bottle of tobasco sauce in his hand and when Sylvester lifts him up to eat him, the tobasco sauce poors into his mouth. The "heat" sends him through the roof and he gets badly injured and has a cast on his leg. At the end Speedy asks him if he wants his musical instrument back. He says no and Speedy says "well, ok". Then he starts playing the same music, forcing Sylvester to dance and hurt his already casted leg even more. 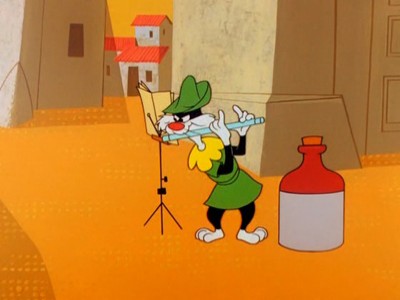