It's Labor Day weekend and most of the men are sending their wives away for a few days. Don Draper's wife Betty is dreading the thought, as her father and his new girlfriend, whom she detests, will be staying with them. With the election approaching, the team at Sterling Cooper is gloomy since the Nixon campaign has not been following their advice. Roger Sterling was hoping to spend Friday night with Joan Holloway but having just seen the movie, The Apartment (1960), she is feeling a bit used. She plans a night on the town with her old college friend who has some surprising information for her. Don and Roger invite twin sisters from a casting call to join them for a drink but things go badly for Roger who suffers a serious heart attack. After the incident Don ends up spending the night with Rachel Menken where reveals a lot of his inner self. 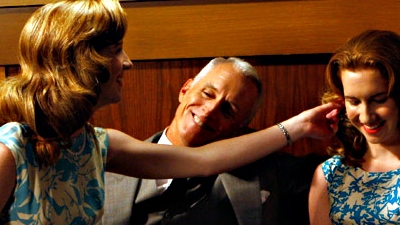