Malcolm's family tries to become friendly with their new neighbours with the pool, but end up with new enemies instead. Neighbour boy Josh convinces Dewey that the lawn gnome wants to eat him, and spreads vicious lies about Malcolm that have the police coming to visit. Young daughter Emily likes to bite Reese every chance she can get, and Reese can't fight back because she's just a four-year-old girl. Lois takes an immediate dislike to Tina, the mother of the family, who refuses to admit that Emily has a biting problem and treats her Hispanic gardener like dirt. Only Hal bonds with new neighbour father Mike, but they have to carry on their friendship in secret. Malcolm enlists Reese's help in smearing Josh's name the way Josh did his. In the process of planting evidence under Josh's window they bust and draw attention to Tina having an affair, in the pool, with her gardener. The new neighbours move out. Commandant Spangler works his cadets hard to prepare for his hero, Oliver North's, 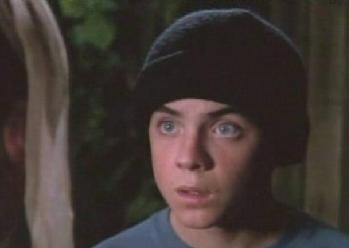