Alternate title: "6 Mile Plunge" February 19, 1985: China Airlines Flight 006 collides with a jet stream while flying to Los Angeles. The no. 4 engine fails and the pilots try to restart the engine at a much too high altitude. The plane banks slowly to the right but the pilot expects the autopilot to steady the plane. The plane slows down and stalls, sending the passengers and crew into a spiraling nosedive. The sudden actions put everyone under incredible G-forces. The Flight Engineer mistakes readings on the gauges for total engine failures on all engines rather than the Captain putting the throttle to idle. The speed increases and the plane pulls out of the dive but stalls again and falls. The extreme forces rip the undercarriage doors off and pieces of the stabilizers rip off as well. The Boeing 747SP clears the clouds and the pilot sees the horizon. The plane is pulled from the dive, pinning the passengers to their seats. The pilot lands safely at San Francisco despite having trouble with the elevators. 2 people are hurt, but everyone is alive. 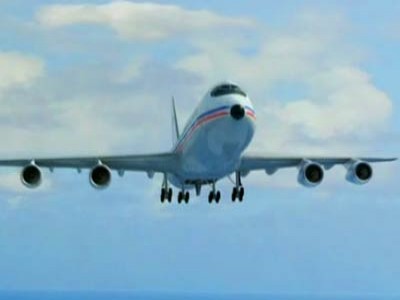