July 17th, 2007 TAM Airlines Flight #3054 is on its final approach to Sao Paolo's notorious Congonhas Airport. Runway 35-L at Congonhas is one of the busiest and most treacherous airports in the world. It's built on a hilltop, completely surrounded by tall buildings. The crew of Flight #3054 gets a report that the runway is wet and slippery. Captain Henrique Stephanini brings his Airbus A-320 down at the foot of the 1,945 meter long runway, activates the one working reverse thruster and applies the brakes, but his plane doesn't slow down. It hurtles down the runway at top speed, crosses a highway and slams into a building and adjacent gas station. No one on the plane survives. Twelve people on the ground are also killed. This is the worst aviation disaster in South American history. Investigators are under enormous pressure to figure out what went wrong on Brazil's busiest runway, before it claims any more lives. 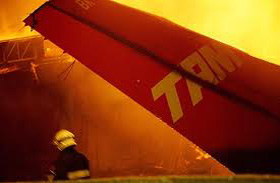