A mysterious aspiring photographer named Jo Reynolds moves into the building. She responds coldly to the other residents' attempts to make nice, although she develops an instant attraction to Jake. She strikes up a friendship with Alison when they take out their romantic frustration on a washing machine. Jo explains that she left New York to escape from her marriage. The women continue to bond, and hustle some guys in a pool game at Shooters. Jo flirts shamelessly with Jake after he comes up to her apartment in a towel to remind her about the hot water shortage. Michael and Jane begin spending time with a respected pediatrician and his wife. Jane suspects that the woman is being abused, but Michael doesn't believe it because her husband is so good with his patients. Jane is certain that something is wrong, and pleads with Liz to seek help. Liz goes to the Mancinis after being beaten, and decides to leave Scott. Michael plans to report Scott to their boss, but convinces him to do 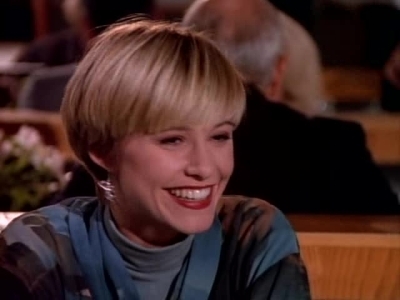