Satisfied at Camelot's conditions, Merlin decides to go on a holiday in order to rejuvenate. This vacation nap is supposed to last a few months, but when Merlin awakes, he finds he has slept for fifty years. Upon his return to Camelot, he discovers a downtrodden place. Almost all of those he knew have died; Lord Weston runs the kingdom; and the Holy Grail has departed from the castle. However, Merlin's protective enchantments have held invaders in check. A young thief named Jack and his tagalong pig Sir Snout stowaway in a cart entering Camelot, angering its driver Squire Brian. Jack is no ordinary vagrant, as he possesses some rudimentary magical skills. Jack enters the chamber of Yvonne, granddaughter of Sir Gawain and steals a pendant. Yvonne enters and while Jack hides, Master Graham, a local blacksmith whom she loves, visits her. Jack then attempts to steal Merlin's wand while Merlin concentrates on the whereabouts of the Grail. Merlin senses the visitor, and at first evicts him, but later apprentices Jack after a vision of the Holy Grail appears to both of them. 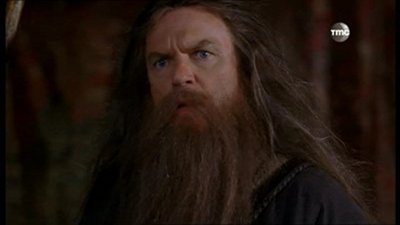