Richard is arraigned and denied bail. Beverly Nichols visits Ted, bringing an alibi for Richard. She tells Ted that she was out clubbing with Richard the night of Jessica's murder and was with him when he discovered Jessica's body. When Ted wonders why Richard didn't come forward with this information when he was arrested, Beverly claims that he was protecting her from her jealous husband, who had beaten her once before when he found out that she was with Richard. Although it's apparent that Ted doesn't believe her story, he accompanies her to Parker Center when she gives her statement to Polson. Polson doesn't believe her either, but he can't shake her story. Based on Beverly's statement, and over Polson's strenuous objections, Garfield drops the charges against Richard and orders him released from custody. Polson then arrests Neil after matching a DNA sample Neil gave in an earlier paternity suit to the DNA found at the crime scene. Neil begs Ted to represent him, but Ted declines, r 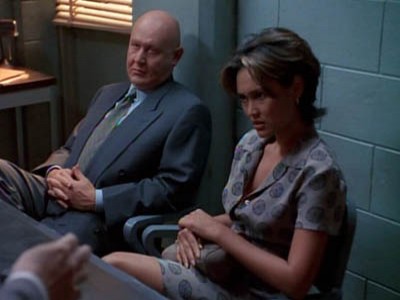