Best of Luck on Future Projects

Ned is working out of the muffin shop (with little success), he's being sued by his former employer for stealing a client, and now Stacey is ready to move out of the apartment. He flashes back to the beginning of his relationship with her. Ned meets an old client who's started a promising new business, and he sees an opportunity for himself. He pleads with Stacey to help him out one last time in her role as ""business wife,"" and she relents. The meeting with his client goes well, until the couple gets another invitation out. Ned tells Stacey she needs to continue in her role, because she's proven that she doesn't have the maturity to live life on her own. Hurt and insulted, Stacey storms out. A few days later, the divorce is finally granted. Ned has sublet his apartment and is living out of the muffin shop, where his early morning routine is not doing much to ensure repeat business from the customers. He shows up one day at Stacey's studio apartment, telling her how he's been on the roa 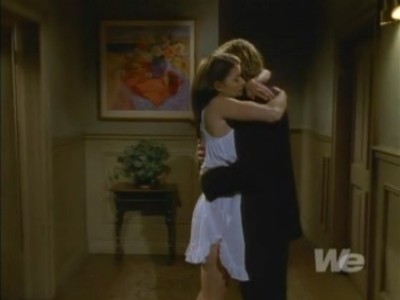