It's the christening of Mayor Bey's baby, Michael, but the Rome residents are flabbergasted when Laurie announces that she had the baby for her brother Jerry and his lover Gordy, who plan to raise the baby in the town. The Beys' estranged mother Christine, who turned her back on her children because she was deaf and he was gay, turns up and announces she is taking them all to court to get custody of her grandson. Tension brews in Rome as the people take sides on the issue and a campaign begins to have Laurie removed as Mayor, resulting in Jerry and Gordy being attacked at the supermarket by a vicious homophobic gang. Despite attempts by the prosecution to discredit the men and prove their lifestyle is unsuitable to raise a child in, Judge Bone ultimately rules in their favour and allows them to keep baby Michael, saying he doesn't feel they pose a threat to the boy. The court case over, Mrs Bey leaves Rome again under a cloud, and Laurie is emotional as she leaves the baby in the care 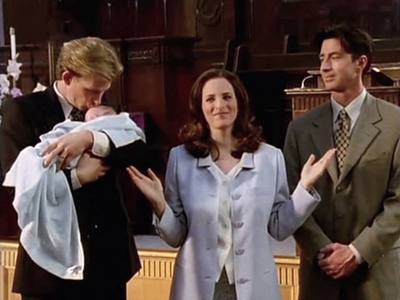