While I’m working on other projects I’ll put up this video of an experimental furnace I built that operates by natural draft and uses charcoal as a fuel. The furnace burns the fuel on a grate for maximum area of air entry. The chimney attached to the furnace is 2 m tall above ground level. The pit is 25 cm cubed and extends below ground level. The whole structure took about 2 weeks to build. A brick of iron oxide (from iron bacteria) mixed with charcoal powder was made and placed in the furnace sitting on a grate about 12.5 cm tall. The furnace was lit with wood and fired. Charcoal was added after this point and a high temperature was reached. The ore brick melted and produced some tiny beads of cast iron. In contrast to the other furnace I made in the previous video, this one produced less iron while consuming the same amount of charcoal. I’d actually built this furnace before the previous video in an attempt to reduce labour by having a tall draft chimney replace the work and complexity involved with using a blower. I’ll keep experimenting with natural draft furnaces, the principle is sound but the method of introducing the ore (batches of ore on a grate instead of continuous addition of ore pellets) is probably inefficient or could be improved on. 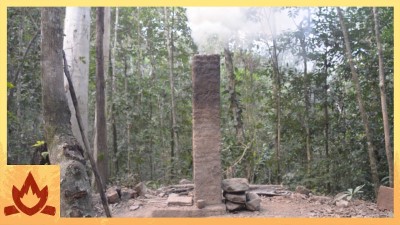