I built a kiln from bricks for the purpose of firing bricks. I started by using a brick mold made of fired clay from a previous video and made bricks from clay. The bricks were allowed to dry and were then transported to my hut using a brick carrying harness I made from cane and a piece of wood. They were dry stacked onto the wall of the hut to keep them out of the rain while waiting to be fired. I then constructed a brick kiln using mud as a mortar for adhering the bricks together. The kiln had 2 fireboxes side by side and was of the updraft kiln type. The kiln was open at the front and back so it could be stoked from these areas. This gave a more consistent firing I found then a kiln only with firebox opening at the front. I put 40 un-fired bricks into the kiln and fired them for 2 hours 30 minutes. All the bricks were fired sufficiently. I then tested an un-fired brick and a fired one by putting them in water. The un-fired brick dissolved quickly while the fired one survived completely intact. The test was a success. My only issue is the bricks are a little weak due to the clay they're made of. I'll look at refining clay or finding a better source somewhere in this area. 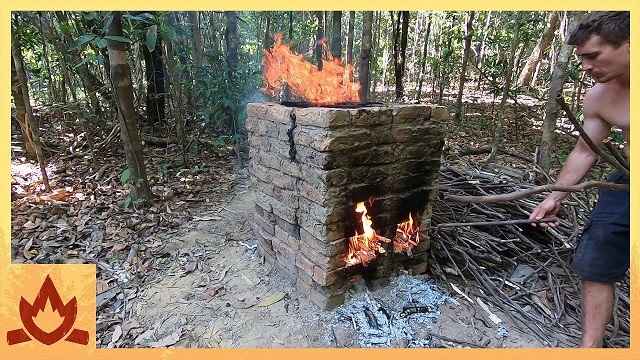