Sara meets Michael and Lincoln in a train station in Evansville, Indiana; when she sees Kellerman with them, she becomes disturbed and upset. Kellerman tells that she has a key of a private cigar club in Chicago. Caroline calls Kellerman and he tells that he is heading to Chicago by train, and she promises his life back, inclusive the chief of staff position. T-Bag tells Susan that they are passing through an "adjustment period" in their lives; when she tells him that she will have a guest called Patty Wallace, T-Bag welcomes Patty with a magnificent family brunch and uses the strong father figure to discipline Zack, seducing the guest with his charm and attitude. Wheeler is reporting the actions of Mahone to the FBI Headquarter and they find that Haywire killed a man in Algoma, Wisconsin. Mahone visits Bellick in River Fox, releases him using a habeas-corpus to make his dirty work, and gives a car, a pistol and an FBI badge to the despicable man. Bellick chases and traps Haywire, and waits for Mahone. In Benson, Minnesota, C-Note and Dede are leaving a snack bar when an addicted thief announces a heist. When Kellerman sees a road block on the train, he realizes that he was betrayed. 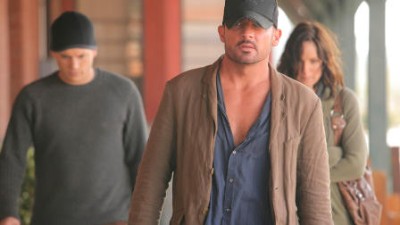